What’s The Big Deal About The HSA?

One of the many “Truths” of the FI community is that the HSA is the supreme savings account due to its triple tax benefit. If there is one thing we like to do here at Choose Beta, it is challenge “Truths” no matter where they come from. So, I guess it’s time for some friendly FIRE. Haha, nice play on words right…

Hold on, I just want to make sure that I clarify something. The HSA does have triple tax benefits. Nothing to argue there. The challenge we want to throw out there is “does it make sense to use the HSA as a savings vehicle only, or should you use it to pay for medical expenses during your working years, like it was designed to do?”

What is an HSA?

A Health Savings Account is a tax-sheltered account that can be used to save up for and pay medical expenses. HSA’s are a type of personal savings account, but they must be used for qualified healthcare expenses or you will have to pay a penalty. Also, to be eligible, you must be enrolled in a High-Deductible Health Plan (HDHP). In my PPO vs High Deductible post, I talked a little bit about the comparison between the PPO and HDHP+HSA plans and how I decided on the HDHP+HSA as the best route for our family.

In the table below I have included the contribution limits for 2021. For more information, checkout the IRS page.

There are definitely different FI strategies built around the HSA and I personally utilized the tax shelter benefit as part of the Tax Free Mega Backdoor Roth IRA strategy. The amazing thing about the HSA is the triple tax benefit. This means that is possible to never pay Federal taxes on any part of HSA funds. HSA’s are setup to allow someone to invest pre-tax into an account, grow tax free, and if used on qualified medical expenses, they can be withdrawn tax free as well.

This is an amazing benefit!

You may ask: “what if you don’t have enough medical expenses in your life to use all of the money that you save over time?” Well, at age 65 you can withdraw money from your HSA for any purchase without a penalty. In this situation; however, you will be taxed just like you would on a 401k.

One other important fact about an HSA, is that you can pay for medical bills out of pocket and then reimburse yourself at a later date. Also, there is no time limit for that reimbursement! This means that you can:

Note: it is critical that you are very diligent in saving the receipts for your medical expenses so that when you decide to withdraw from the HSA, you have proof that can be provided to the IRS in case you get audited. 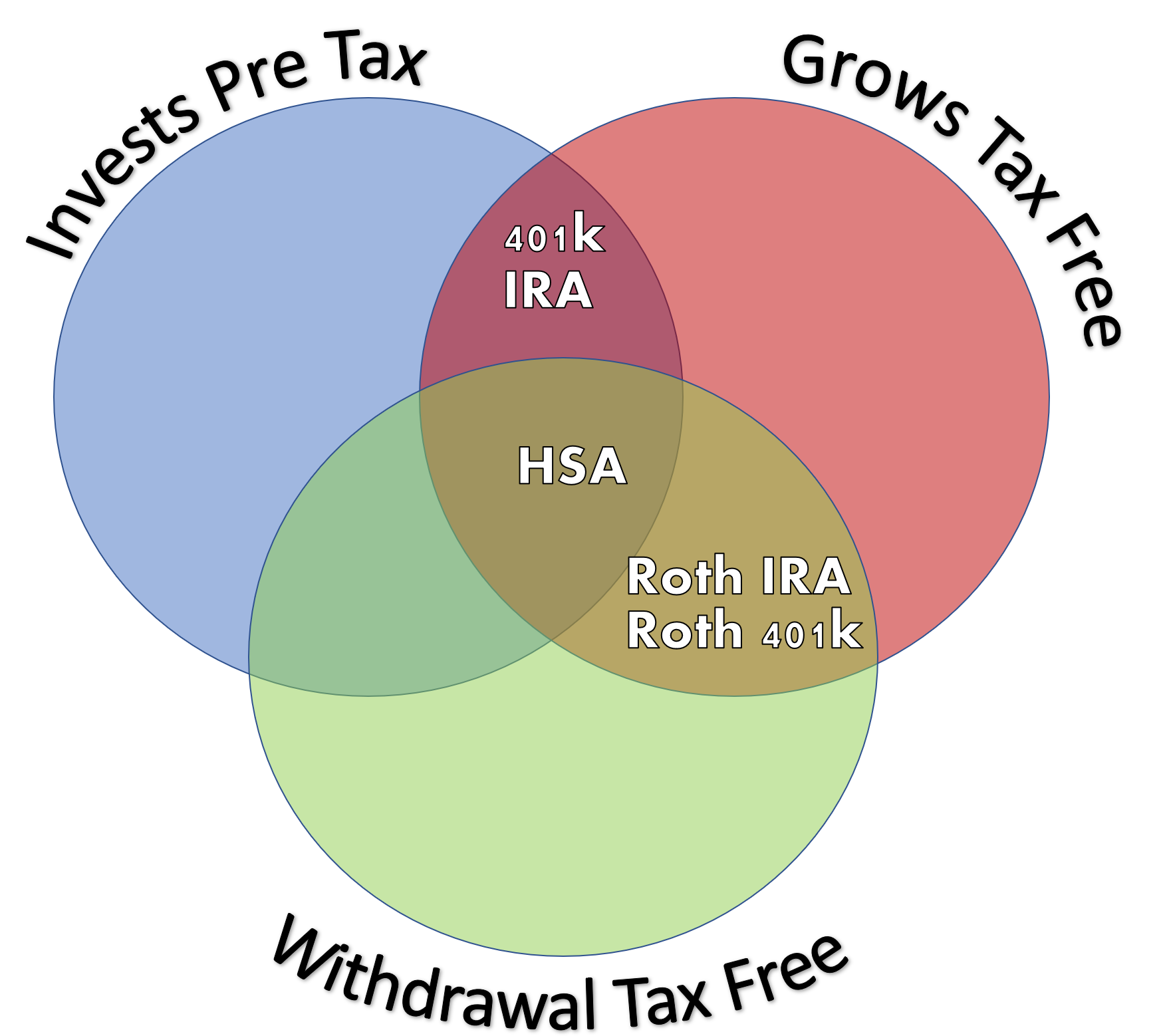 So far this has been pretty straight forward. The benefits are clear, but is it better to:

In order to answer this, there are a few questions that come to my mind:

1. Can you afford to pay your medical expenses out of pocket?

Paying out of pocket may not even be an option if your budget is maxed out. This is especially true if your budget is so tight that your only backup option is to use credit cards. Under this situation, you should definitely pay with the HSA account. There is no benefit of leaving your money in an HSA while taking on high interest debt to pay for the medical bills.

2. If you did not pay out-of-pocket, where would that money be spent instead?

This is an interesting question. Maybe it would be best to setup a case study:

Eddie has just gone to the Dr and now has a $500 bill. Let’s say that he has $7,200 in his HSA invested in the market because he just maxed out the HSA for his family. Should he pay out of pocket and reimburse himself later?

There is no debating it, the triple tax advantage of the HSA is amazing. There are no other accounts that can compare (outside of dropping your tax rate low enough that you don’t pay taxes anyway). When it comes to spending vs saving your HSA funds, for the most part you are better off saving. An exception would be if you cannot afford your medical expenses and your only other alternative is taking on high interest debt in order to pay for them.

I guess there will be no friendly FIRE today!

Until Next time, continue to Choose Beta

Back in the Saddle

Why Don’t We Teach Our Kids Personal Finance?

Exception to the Rule: A Case for Not Buying