This was not a post I had originally drafted in the que, but after a request on the Social Security post, I decided to start putting one together. Thanks, Glincoln for the suggestion:

Thoughts on Withdrawal Rates for the Early Retire

The short answer is “I am also interested in what my thoughts are on safe withdrawal strategies for the early retiree” … I have been guilty of utilizing the Trinity Study results for the 4% rule without considering all of the implications. For this reason, I have (procrastinated) on publishing a post about it while doing a deeper dive into the assumptions embedded in the 4% rule.

This is a critical topic and is one of the backbones of RE in FIRE (Financial Independence Retire Early). Many angles have been explored, analyzed, and projected out, so, what can I add to the conversation that has not already been discussed? Or at least how does this information change my own RE goals?

On the Choose Beta blog, we always enjoy making a point with math. The cool thing about math is that assuming that it is done correctly, everyone should get the same results… Because it’s just math. For this reason, I don’t really want to go back through and re-calculate what has been extensively documented. Instead, I will highlight a couple of my favorite sources and highlight a couple of concepts.

Classic retirement calculations often plan for a safe withdrawal rate based on the 4% rule. This concept is a simple rule of thumb that estimates a target retirement nest egg with minimal effort. It is based on a research paper which was published in the 90’s by three professors from Trinity University in San Antonio Texas and was dubbed the “Trinity Study”:

Retirement Savings: Choosing a Withdrawal Rate That Is Sustainable

These professors evaluated historical market returns in attempt to define a safe withdrawal rates over 20, 25 and 30 yr periods. Through the study, they evaluated the effects of time horizons, inflation, and bond/stock allocations. Upon publishing their results, the 4% rule was born.

It was coined based on the findings that a portfolio consisting of 50% Stocks / 50% Bonds had a 95% “success” rate for lasting a retiree 30 years based on historical data. Since then, it has been used to estimate how much a retiree can drawdown from their assets.

The major issue with utilizing this for early retirees is that the time horizon will most likely extend well past the 30 year threshold. This factor is even acknowledged in the report:

“The numbers imply that young retirees who anticipate long payout periods should plan on lower withdrawal rates than their older counterparts.”

The 4% Rule and the Early Retiree

Extending the retirement horizon past the 30 yr mark requires further investigation and cannot be simply extrapolated out. In order to better understand the reason for this, we must review the critical assumptions in the Trinity Study: 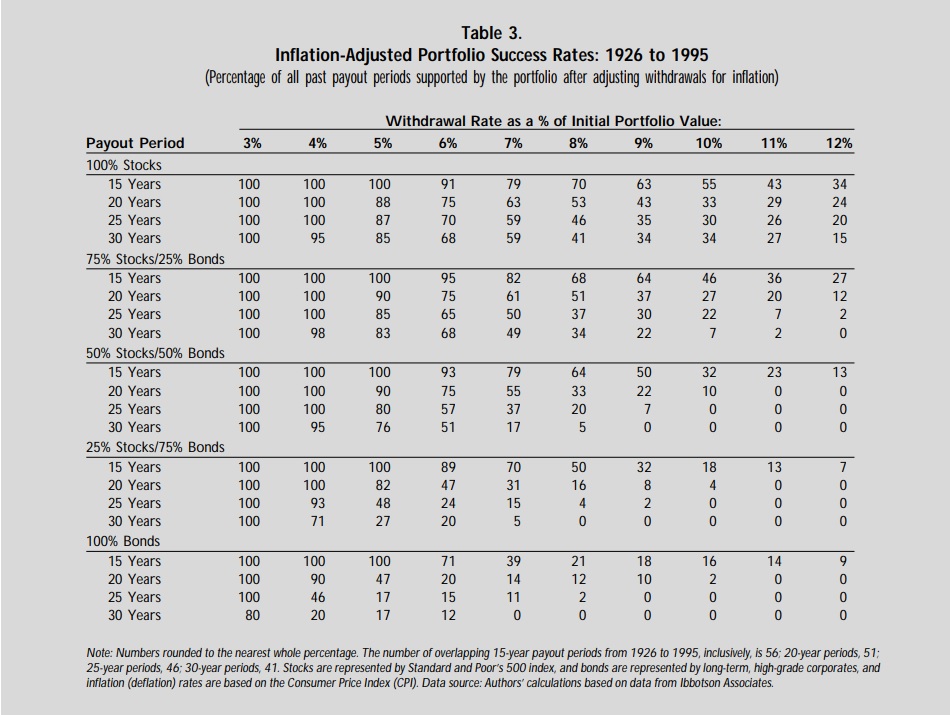 *Source: Retirement Savings: Choosing a Withdrawal Rate That Is Sustainable

Gaps in Extrapolating the Trinity Study

There are a couple of critical items to understand about the assumptions in the Trinity study’s analysis:

These assumptions are part of the reason for the unraveling of the 4% rule for the early retiree. This is because as an early retiree, the planning timeframe will be significantly longer than 30 years on average. Many have taken the trinity study and justified extrapolating the 4% rule well past 30 years on the basis that “if it is good for 30 yrs, then it should be good for longer as well”.  The main fallacy in this argument is that the Trinity study allows the nest egg to deplete to $0 and still consider it a success as long as it does not drop below zero before the 30 year mark.

If the market is averaging 8% returns overtime and we are only drawing down at 4%, won’t we end up making money and growing the nest egg? True, but that is not the point. We aren’t worried about the averages right now. When looking at the distribution of historical data, we need to consider the full range of probabilities including the “tails” of the distribution in order to achieve this same 95% confidence in a portfolio not failing as claimed in the Trinity study.

If you haven’t checked it out yet, I highly recommend the read.

So where do We Go from Here?

As I mentioned in the beginning, I have taken the 4% rule for granted; however, the assumptions that go with it do not necessarily align with my personal goals. We are planning for a much longer time horizon than 30 years. Also, I would like to have a nest egg that could be passed on to my children and a couple of charities that are important to us. For this reason, we are considering the effects of adjusting our personal plan. When doing so for yourself, there are a couple of points to consider:

Based on these results, let’s turn to some of the research that Big ERN has provided in his blog:

Compare the 30 year results in table 1 and table 2. The scenario that gets cited for the 4% rule is the 50% Stocks/50% Bonds case for a 30 year time horizon. When accounting for nest egg preservation, the probability of success for 4% withdrawal drops from 95% to 50%. WTF! The success of the 4% rule relies heavily on drawing down off of the principal of your savings.

So with that said, let’s assume a 60yr time horizon with 100% preservation as a conservative approach. What does this really mean from a savings rate and time horizon? Will we have to work an extra 10+ years of our life?

I am going to run with the 100% stock scenario and before you jump out of your seat, let me explain why:

There should be no surprise that the timeline to retirement is driven by savings rate. This was popularized in the FIRE community through the iconic The Shockingly Simple Math Behind Early Retirement post from Mr Money Mustache. The key is that there is a two fold effect by increasing savings rate. A higher savings rate means more money going to savings, but it also means that cost of lifestyle is lower (AKA the more of your income that is saved, the less you are living off of, which then means the less you need to save to maintain that lifestyle).

For this reason, we pulled in a couple of different scenarios for savings rates to review the effects on timelines:

Adding in the success rates from table 2, we can see the intersection of probability of success over time:

Let’s say you decide to run the 100% stock scenario out until you hit a 3.5% drawdown on the 60 year horizon, this means that you have a 96% chance of success (see table 2). Huge! In the unlikely chance that it doesn’t work and you are uncomfortable with the direction you are heading in the first 10 years of RE, you still have youth on your side.

A small side gig, part-time work, or even starting your own business could easily stall and reverse the trend. You don’t even need to make that much! Simply supplementing your drawdown enough to take it from 4% to 3% or 3% to 2.5% will provide a significant probability of turning the trend around. The key is to create trigger points on when to pursue this option.

Just remember, the data utilized to create the tables above included all of the major downturns including the great depression.

This idea of being able to return to work if needed may also enable you to lean to the higher drawdown side, because your worse case scenario is going back to the life that you are living today (going back to work). Your worst-case scenario is everyone else’s normal life…

Also, remember that we are not even talking about averages here. On average, the 4% rule should result in significant growth. These rules are addressing the “tails”, the left side of the distribution.

It is important to fully understand the assumptions embedded inside of the 4% rule and not take them for granted. Early retirees must account for longer time horizons and the implications that come with them. The 4% rule is a great starting point as a rule of thumb. It provides a simple way to run out calculations on savings timelines and targets.

For those that are willing to risk going back to work or picking up a side gig, the 4% rule is an ok starting point. Remember, it is a game of probabilities and while there is a risk associated with it, the odds are in your favor based on all historical data.

For those not willing to take the risk, the difference in the 4% rule and a 3.25% rule is only a couple of years if you are running with a >50% savings rate. In the big picture, a couple extra years is a small price to pay for the peace of mind. This is especially true when you compare it to the decades of extra working years the “Normal” person will be committing to.

It all comes down to your risk tolerance. The good news is that your worst case is everyone else’s reality (I am sure I stole this line from someone else but it has been repeated throughout our community many times).

Educate yourself and don’t blindly take someone else’s advice. No one in as vested in your future as you are.

Until Next time, continue to Choose Beta

A Letter to My Wife on Mother’s Day Exception to the Rule: A Case for Not Buying

To Defer? Or not to Defer? (Roth vs Traditional)

Back in the Saddle